Jiji the French clown from the NGO “Les enfants d’abord” was in the area for three weeks and he was a hit all around the commune of Antalaha! He had given me a few days notice that he was coming so I was able to organize his schedule with six (6) different schools in the area.

The best part about this visit was that we were able to get the kids of Ochidee Vanille (mentally and physically challenged kids of Antalaha) together with the kids of our C.A.L.A. villages (former leprosy victims). It was the first time in the history of Antalaha that Ochidee Vanille kids got together with other kids from the community. My goal here is to integrate these kids as much as possible so that the people of Madagascar will become more open to accepting everyone in to their community. As with former leprosy victims, handicapped people are seen as a threat to society.

Here a few pictures, they speak for themselves I think! 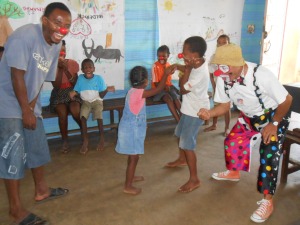 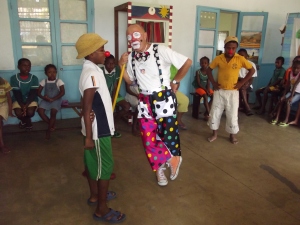 CALA and Orchidee Vanille kids together!!